February 1: The rain stopped briefly so I ventured out from the cottage where I’d been holed up trying to get some writing done, and spent a pleasant twenty minutes watching a buzzard soaring and swooping over golden moorland, in a bright blue sky.

February 2: The hammer and chisel represent a rudimentary (and somewhat brutish) approach to the editing process. Highly pertinent, obviously, to research that considers how we learn to use tools.

February 3: The cold that I took with me to Dumfriesshire morphed into a relentless dry cough while I was there; I didn’t know at this point that it would still be lingering, catching and tickling and driving me to distraction a week later.

February 4: This one’s about the editing process. I find that watching my word count as a measure of progress always trips me up, as I invariably end up hacking out so many words – it seems every document I produce for PhD has a sister document titled ‘removed from…’. Still, it’s all about tightening up and honing in, right?

February 5: For the last few weeks I’ve been working on the Heydays project at Leeds Playhouse, working with older people to create weekly stitch journals. Today was a Heydays day, and I’ve found that I’m really looking forward to each session, as much to catch up with everyone as to see how they’re progressing with their embroidery. I’d like to think there’ll be something like this out there for me when I’ve retired.

February 6: Spending time talking to other women of a similar age (somewhere between late thirties and early fifties) who are also doing craft-related PhDs, admiring their drive, and worrying that however great things are now, it’ll all be for naught if I can’t get over my crippling lack of self-confidence – will I seize opportunities or squander them?

February 7: A necessary day of crossing things off a list.

February 8: I took a day off and spent the day sewing. Clearly a day of wobbling moods.

February 9: The pressure in the barometer plummeting as low as I’ve seen it, as yet another storm arrives – this one’s named Ciara.

February 10: Sorting out the books for the next chunk of writing. With each section I try to create an orderly pile of what seems most relevant, and by the end of that section there’ll invariably be books and papers scattered around the room like the consequences of a tornado.

February 11: Today I thought I’d see what happened when I combined two things, stitching and life drawing. It turned out better than I’d expected, and really made me think about where I was putting each ‘mark’. Two hours isn’t quite long enough to get properly stuck in with such a laborious process, so I think I’ll save next experiments for longer sessions.

February 12: I’ve kept some sort of notebook or diary since I was eleven, and while most of the older ones are tucked away (and in the case of teenage ones, disposed of at the point where I realised I wasn’t going to have a child of my own), sometimes I happen across one and find myself flicking through it, feeling like I’m eavesdropping on a previous version of myself. This particular exercise book was full of lists of routes to climb, runs to do one day, books I intended to read that year. These plans turned out to have been, for the most part, set aside, and as the afternoon wore on I found that some decisions, now long ago and far too late, stung more than I’d expected.

February 13: This one’s quite hard to read, and I think that’s deliberate – it says ‘do I exist?’ and it’s about feeling invisible in very many ways. It was prompted by the rare occasion of lunch with my dad, with whom I’ve always wished things were different.

February 14: Valentine’s day, and a gathering for my stepdaughter’s 18th birthday the day before. I know it’s a well-worn cliché, but there’s definitely something boggling about watching the transition from child to adult – I met this one when she was eight and a half, and it’s been quite the journey, for both of us.

February 15: Another storm – this time it was Dennis’s turn to hurl winds and rain across the country.

February 16: I went swimming for the first time in ages, and got very irate with fast lane swimmers taking over the medium lane in addition to their own. Stay in your lane!

February 17: Homemade pizza with our lovely friends from down the road.

February 18: A trip to Edinburgh to see the May Morris exhibition at Dovecot Studios and the Touching Stitches exhibition about the Needlework Development Scheme in the 1960s. I also caught up with Dr Alison Mayne, a particularly warm-hearted craft scholar who introduced me to the magic of cardamom buns over a cup of tea.

February 19: I did an additional session at Heydays today, working with grandparents and grandchildren to make stitched and glued portraits of one another. So much fun!

February 20: I’ve been reading Tracey Thorn’s ‘Another Planet’, her autobiography about life as a suburban teenager pre- Marine Girls and Everything But The Girl. A passage about ideas of what a girl ‘should’ be, and about being a ‘failed girl’, resonated strongly. Earlier in the week I’d had an unfortunate run-in with a harried service person at an Edinburgh restaurant, who mistook me for a man – a sore point stretching back years for my tall, short-haired, not-particularly-bosomed self. This was all compounded further by some conversations on academic Twitter that seemed to be all about women bigging one another up, which on one level is a great thing and absolutely fair play, but on another level serves to exacerbate the sense that there are cliques, that one will always be on the outside and never on the inside. Of course, it could be argued that this is the natural space of the ethnographer, but that repeatedly-reinforced sense of being a misfit is a hard one to shrug off.

February 22: A game of Monopoly with my niblings (who vary in age from 5 to 9) – I was amazed that even when the game was paused overnight, nobody stole all the money or disrupted the board. A far cry from when their dad, their uncle and I used to play.

February 23: Returning from down south via the endless roundabouts of Milton Keynes.

February 24: Woke up to a decent coating of snow over the fields, which thrilled my dog beyond measure. Snowballs are apparently the Best. Thing. Ever.

February 25: The previous morning’s snow had melted quickly, adding to already-swollen rivers and streams. I came out of the local woods via a small bridge crossing over a stream, and found myself caught up in a drama whereby some poor woman had been washed off the bridge by the force of water going across the bridge. I helped where I could, then headed home to avoid getting in the way of the emergency services. Today, a couple of posts on the village Facebook page checking on the welfare of the washed-away woman erupted into unpleasantness, including my part in the situation. Although the grumpiness from one quarter was easily outweighed by support from other villagers, the whole thing left me feeling very upset and in need of a reminder that trying to be kind is rarely (if ever?) the wrong course of action.

February 26: A rare day of sunshine after what’s seemed like weeks of rain.

February 27: Ten years ago I bought a second-hand car and I went on a date with a tall triathlete I’d met on the internet. The car turned out to be terrible and is long gone, but fortunately the man wasn’t, and isn’t. 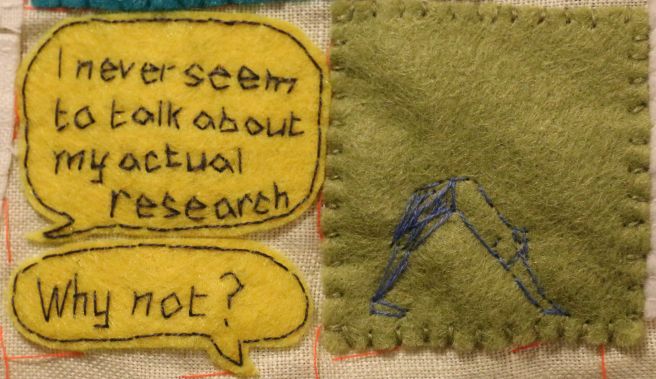 February 28: A realisation that I tend to talk about the stitch journal a fair bit but that there’s a large gap where discussion of the main body of my research should sit. I’ve found myself reflecting on this and wondering why that is; I think that in large part it’s down to ongoing uncertainty about the shape of what it is I’m doing. Time is moving on, though, and uncertainty is shifting to discomfort and a certain degree of alarm.

February 29: I had a period of a couple of years where I’d found an ashtanga yoga class that I really enjoyed, and going once a week really helped my remarkable lack of flexibility. With one thing and another I fell out of the habit, but I finally got round to going again today. Did me the world of good – who knew?